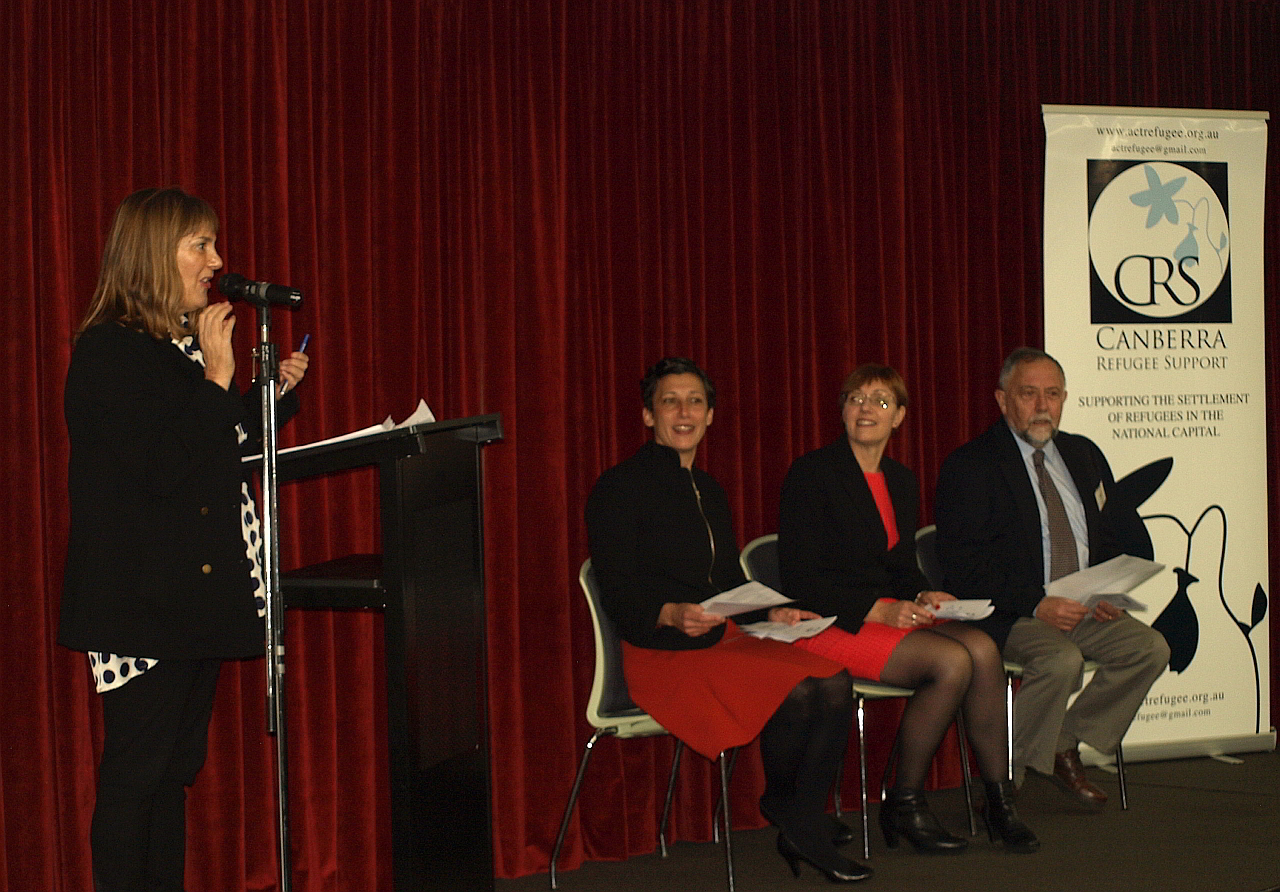 To mark UN World Refugee Day each year, Canberra Refugee Support sponsors a refugee scholarship program to recognise and support refugees in Canberra. 2017 was the thirteenth year a public scholarship program has been delivered. This is probably the most significant event in the CRS calendar which is held in June at the Theo Notaras Multicultural Centre in Civic.

The purpose of the Canberra Refugee Support Scholarships is to recognise meritorious performance and to encourage and support outstanding refugee students in the pursuit of their personal development goals. Please click here for further information on the scholarship page:

Scholarships are awarded to Asylum Seekers or Refugees who are studying or seeking to study at CIT, IEC or at other institutions while they are living in Canberra. Winners are selected on the basis of meritorious performance rather than academic results alone. The CRS Refugee Scholarship Program has grown from a modest “one-off” presentation, to an annual event with support from a very wide section of the ACT’s community.

In 2017, in total, 52 scholarships with a total value of $31,500 were awarded. Awards ranged in size from $300 to $1000 and were spread across primary, secondary and adult students with slightly more male than female recipients and nearly 60 per cent of the awards going to school and college students.

The Scholarship Program is funded from donations. Our 56 donors consisted mainly of individuals, but also represented were churches, schools, other non-government organisations, government departments and their staff and an international agency.

We are grateful to the many donors who support the refugees who have settled in the Canberra region.

Thanks again for this effort must go to Catherine G, who repeated her outstanding work from last year – and the two years before!

Support for, and knowledge about the program is increasing rapidly. Articles in the media about the scholarships program have appeared in The Canberra Times, The Canberra Weekly, City News, The ACT Public Service ‘PSNews’ and a media release by the ACT Minister for Multicultural Affairs. There was also a mention of the program on radio RN on Saturday morning.

Our MC for the event was the well-known and much loved (now retired) ABC Local Radio 666 presenter Alex Sloan, who as for the last three years, did a marvelous job to keep the event moving and flowing.

The President of CRS, Doug Hynd, noted in his introductory address that Alex is this year’s Canberra Citizen of the Year, a true reflection of the affection and respect in which she is held in Canberra. Alex was recognised for her services to the community of the ACT, through her commitment to telling the stories of Canberrans over 22 years in local radio and through her selfless support of a range of community organisations and charitable events.

In his address, Doug officially opened proceedings with an explanatory address about the program, and welcomed recipients, CRS members, other supporting guests and a delivered a special thanks to donors.

The Keynote Speaker was Ms. Natasha Yacoub, representing the Regional Representative of the UNHCR, Thomas Albrecht, who was unable to attend. Natasha gave a thought provoking and supportive addresses.

The addresses by Doug and Rachel are at the following links:

Congratulations to all of the 2017 scholarship winners.

We have many people to thank for making the event possible.

Secondly, our organisers. The program was run this year by a team of Chris A (coordination), Catherine G (fund-raising), Judy L and Jane L (nominations), and Brian C (media and logistics), all of whom did a terrific job, with further assistance, particularly on the day, by Morna W, David C, Virginia B, Jane C, Alison T, Colleen F, Steve W, and Christine C. The thanks of all CRS members go to them and to all who helped in so many ways. Without these dedicated volunteers the event would not have been possible.

Finally, our donors. We rely on the generous support of the Canberra community to make this event possible every year. We highly value our links with all the people and organisations with whom we work to assist refugees in our local community. We are particularly grateful for the generous sponsorship we have received for scholarships, and recognised their contribution on our program of events.