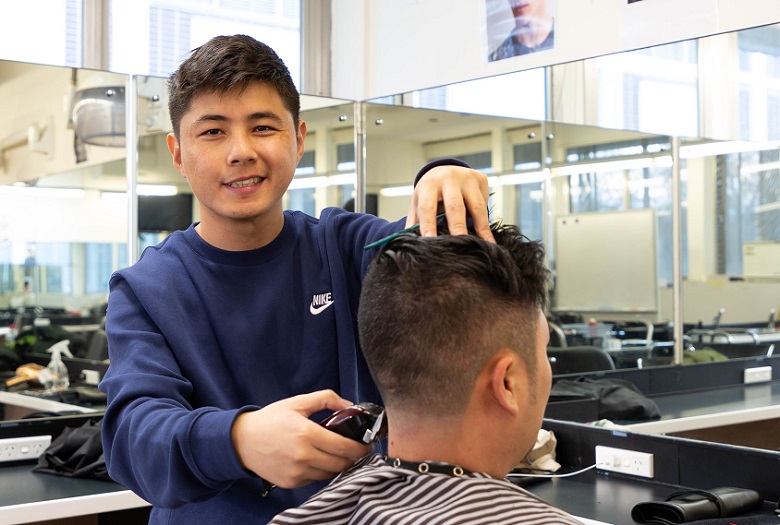 Tenzin Khenrab is one of 49 refugees and asylum-seekers in the Canberra region to receive a 2021 scholarship from Canberra Refugee Support (CRS.)

CRS provides the scholarships to help refugees and asylum-seekers meet tuition fees or buy computers, books, or other equipment for their studies.

Tenzin was born in India after his family fled from Tibet. He worked as a barber in New Delhi before coming to Canberra as a refugee in January 2020.

He is doing a Certificate III in Barbering at the Canberra Institute of Technology (CIT) Reid Campus and works part time as a barber in Weston to help pay course costs of $8000.

“The scholarship will help me with the fees” said Tenzin. “I hope to complete my course within a year and eventually run my own salon.” He rates the CIT training highly. “I’m learning a lot because it’s very practical and the teachers are very helpful.”

Schools, tertiary institutions, and organisations that support refugees or who are involved in their education recommend students for the scholarships. The scholarships are principally based on the students commitment to their education. CIT nominated Tenzin because of his dedication to study and because he inspires his classmates. “Tenzin goes out of his way to help other students and it’s a pleasure to have him in the classroom,” said his CIT teacher Tegan Riley.

Normally scholarships are awarded at a major ceremony during United Nations World Refugee Week. This year COVID restrictions mean there will be several smaller ceremonies. Tenzin and six other CIT students will receive their awards at a ceremony at CIT Reid on 23 June 2021.

The Canberra Refugee Support scholarship program started in 2006 and relies on donations from individuals, church groups and service clubs. The United Nations Refugee Agency has praised the CRS program.

Canberra Refugee Support is a not-for-profit refugee settlement and advocacy organisation. It aims to be a ‘good neighbour’ to refugees and asylum seekers in the Canberra region.