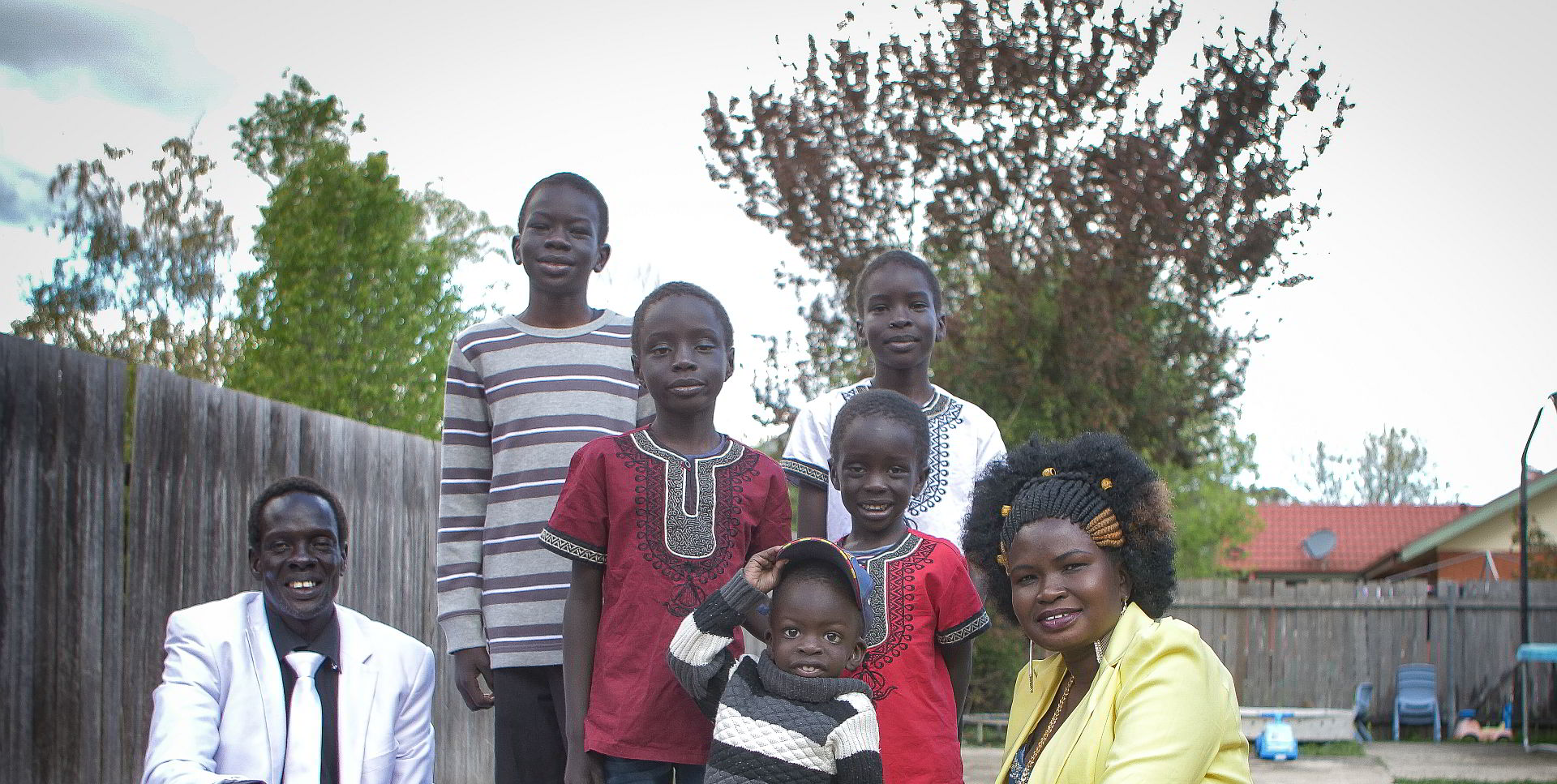 Malual Kuir and Dabora Moses first became aware of Canberra Refugee Support (CRS) when they needed help to transport two of their five sons to swimming lessons.  With no license, no car and a busy life juggling occasional casual work, schooling, learning English and settling into a new community, the trip to swimming lessons was just one challenge that the couple could not overcome.

Arriving in Canberra after 17 years in the Kakuma refugee camp, where the first 4 of their 5 sons were born, the normal rigours of a busy family life were amplified by the demands of settling into a new country and culture with minimal government support and an assumption that the family knew how things worked in Canberra.

Brian Calder and his son Matt from CRS were part of the team allocated to Malual and Daborah to help them, as good neighbours would, with a lift to and from the pool. Three years on, the Deng boys are soccer teammates with Matt’s; Dabora and Malual affectionately refer to Brian as like a ‘father’, and the families share social occasions.

“Early on, my wife Christine and daughter-in law Anne introduced Daborah to the community food-banks and other community services that at the time were essential to the family” said Brian. “CRS aims to assist families to settle in Canberra as quickly as possible through ‘good-neighbour’ support, and this family is a testament to how this can be achieved”.

“CRS has helped us become a part of this community” says Dabora, who is pregnant with her sixth child. “It has helped us start our new  life in Canberra”.

Malual says that Brian has helped him immeasurably. “He has helped me more than my own father could have – he didn’t have the means” said Malual.

The good neighbour support offered by the CRS team is social, community-based, but also practical, which has helped the family find solid footing in the community in a range of ways through both direct support and links to other services. Dabora was supported by the Migrant and Refugee Settlement Services (MARRS) to get her Australian license; the second-hand car now used to take the boys to school and other activities was provided through a donation to  CRS. The eldest son Deng now has a bursary  to Marist College for 2021, facilitated by support and connections through team leader Matt.

“We take a lot of knowledge for granted as we navigate the demands of every-day living in Canberra” says Brian. “Many of our systems and forms to access services or information can be difficult if you’re new to a country, language, and culture. CRS members can help in ways that are second nature to us but can make a real  difference to individuals and families who are new to our community. Whether it’s filling out an on-line form, or just helping with accessing information on a website – these small acts are incredibly important”.